Sharing is something we are always encouraged to do as children, but it isn’t emphasized as much as we grow up and become more independent. Sharing builds trust and creates new relationships. It can bring us together even if we don’t agree on everything. And, right in-line with our curbing consumerism theme, “sharing more could allow humanity as a whole to consume less, hopefully shrinking our economy’s voracious appetite for materials and energy.” So, today we’re going to be focusing on the “sharing economy.”

It seems pretty self-explanatory, right? An economy built around sharing. You have almost definitely heard of (and probably used) a service that is part of the sharing economy. Car-sharing services such as Lyft and Uber, vacation rental services such as AirBnB and VRBO, and the city’s RedBike program are all examples of the sharing economy. But there is more to sharing than just the exchange of goods. It can help to create stronger communities and greater interpersonal connections. In theory, sharing more means we’re consuming less, making it a natural focus for our Curbing Consumerism theme. In that spirit, let me share with you what I’ve learned about the sharing economy.

The Commons: Tragedy or Triumph? 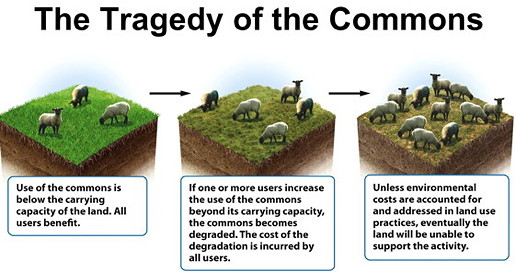 Caption: Many argue that humans have been using the earth as their “commons” and because of unchecked industrialization and rampant consumerism, the earth has surpassed its carrying capacity and climate change has been accelerated. (Image source:Sustainable Environment )

If you’ve ever studied economics, you may have come across a concept known as the “tragedy of the commons.” The basic thought is that if there is a common space all can access, those acting in their own self-interest might overrun the commons and make it unusable for everyone. Until the 1700s, “nearly every human settlement—even long after conceptions of private property had taken shape—had a ‘commons,’ shared land that locals could use for farming crops and grazing animals.” Then came the industrial revolution and thus the mechanization of much of our economy, leading people to find easier ways to act in their own economic interests. We didn’t need to share anymore, we could have what we wanted, when we wanted it, without having to share with others.

So, it seems that in the past 300 years or so, humans haven’t been doing a great job sharing. However, that doesn’t mean we can’t change! Environmentalists advocate for sharing not just things like food or vehicles, but also talents and skills. They believe that to truly counteract climate change, we have to work together. We need to collectively trust each other and share our unique skills to figure out solutions to the climate disaster we find ourselves living in.

A lot of those cooperative, sharing-based services happen a lot more naturally and successfully at a local level. This concept of more localized sharing services makes even more sense when you consider the tragedy of the commons. The commons doesn’t have to be a tragedy if there is community understanding and clearly set rules about how common things are to be shared. If people have the option to buy into the sharing economy, the tragedy of the commons can actually become a triumph.

The Problem with the Current State of the Sharing Economy

“there is a concern that some companies may use the ‘sharing economy’ as a marketing gimmick to disguise profit-motivation and exploitation under the pretense of making the society a better place.”

I was surprised to find a bit of a debate in sustainability circles about what the “real” sharing economy looks like. For some, companies like Airbnb and Uber aren’t “real” parts of the sharing economy. This argument stems from the fact that those companies were begun as capitalistic rather than environmental ventures. While users of commercially successful sharing services are indeed sharing, the spirit of sharing isn’t what draws most people to those services, but rather the price and convenience of the services. As an article in Nature describes, “there is a concern that some companies may use the ‘sharing economy’ as a marketing gimmick to disguise profit-motivation and exploitation under the pretense of making the society a better place.” They use “sharing” as a label that sounds nice, but they don’t necessarily care about it themselves.

Let’s look at ride sharing. The founders of Uber and Lyft started their companies because they thought people wanted a more convenient way to find a ride. Ride-sharing was created in response to the idea that people don’t always want to drive their own vehicles, hail a taxi, or take public transport. So increasing sharing wasn’t actually a motivator for those startups. This is where it starts getting dicey. Another issue stems from the fact that ride sharing isn’t as environmentally friendly as the companies would have you believe. As transportation fellow with UC Davis, Regina Clewlow puts it, “me swapping out a trip that I would have driven myself for a trip that I’m riding in is still the same number of miles.” Actually, it could be even more miles given that drivers often drive around or sit idling while waiting for their next fare. In addition, many have cited the emergence of ride-sharing services as one of the many reasons public transit ridership rates have declined. While there are many factors that also affect the decline in public transit use, “when you take…people out of a bus and into an Uber, you increase traffic and congestion for everyone, and even slow that original bus down.” So ride-sharing might seem like a good sharing option in theory, but there are definitely some issues when you dig a little deeper. And, unfortunately, there are problems such as these surrounding many for-profit sharing services.

None of this is to say you should stop using those common sharing-based services, but learning all sides to the sharing economy is important.

One of the positive things about the commercially successful services like Airbnb and Uber is that they demonstrate that people are willing to share. People don’t mind getting in a stranger’s car or sleeping in a stranger’s home.

What does this sharing economy that sustainability advocates want look like? Let’s go back to the idea of ride sharing. Those who fight against the sharing label being applied to companies like Uber and Lyft would probably say that true vehicle sharing would look something like a co-op or neighborhood owning one vehicle that everyone had access to. They would also have systems in place encouraging the use and expansion of public transportation. They would want to see less cars on the road and more people relying on a small number of truly shared personal vehicles, public transportation, or low-carbon emitting modes of transport like walking or biking.

From what I can gather, the sharing economy that sustainability circles are looking for is a step back in time. We share the food we grow, the tools we own, the skills we possess, and we build community and connection around it. The great benefit we have now that we didn’t have, say 200 years ago, is that we have so much more technology to help us connect and streamline those bartering and sharing systems that sustainability advocates are calling back to.

Sharing is easier in smaller, often rural, already close knit communities because people know and trust each other. However, we’ve got to be realistic because the UN estimates that 68% of the world’s population lives in cities. It’s much tougher to form tight-knit communities or even know your neighbors when 100 other people live in your apartment building. However, one of the positive things about the commercially successful services like Airbnb and Uber is that they demonstrate that people are willing to share. People don’t mind getting in a stranger’s car or sleeping in a stranger’s home. “The platforms of the sharing economy…enable city dwellers to share with strangers, potentially building trust and forming new relationships.” And trust and relationships, most sharing economy advocates would argue, are integral to the success of the sharing economy as a whole. Now more than ever, technology is the sharing economy’s best friend. The platforms that sharing economy advocate’s dislike have helped to prove that we can utilize technology to help people share and there are systems in place that lead us to trust the people we’re sharing with, even if they were a stranger two minutes ago. 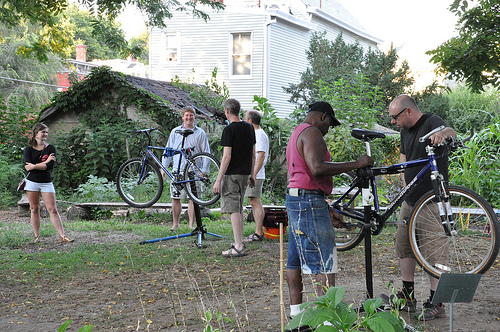 The Mobo Bike Co-op in Northside encourages members to learn how to fix their own bikes through skill and tool sharing. Image source:MoBo Bike Co-op

The tough thing is that while, in theory, people say they support the idea of sharing, many folks are still pretty much working with their own self-interest in mind. That’s totally understandable, the American Dream is based on the idea that everyone should be striving to become independently successful.

Look at the original Clifton Market, for example. Many people bought into the grocery co-op before it began, but the higher prices and relative proximity to larger, cheaper grocery stores caused it to be sold to a private owner. People wanted it to succeed, but buy in came at too high a financial cost for many folks. Creating successful sharing systems takes a lot of work, but it’s definitely possible.

Many parts of the sharing economy rely on community buy in, especially in the form of dedicated volunteers. 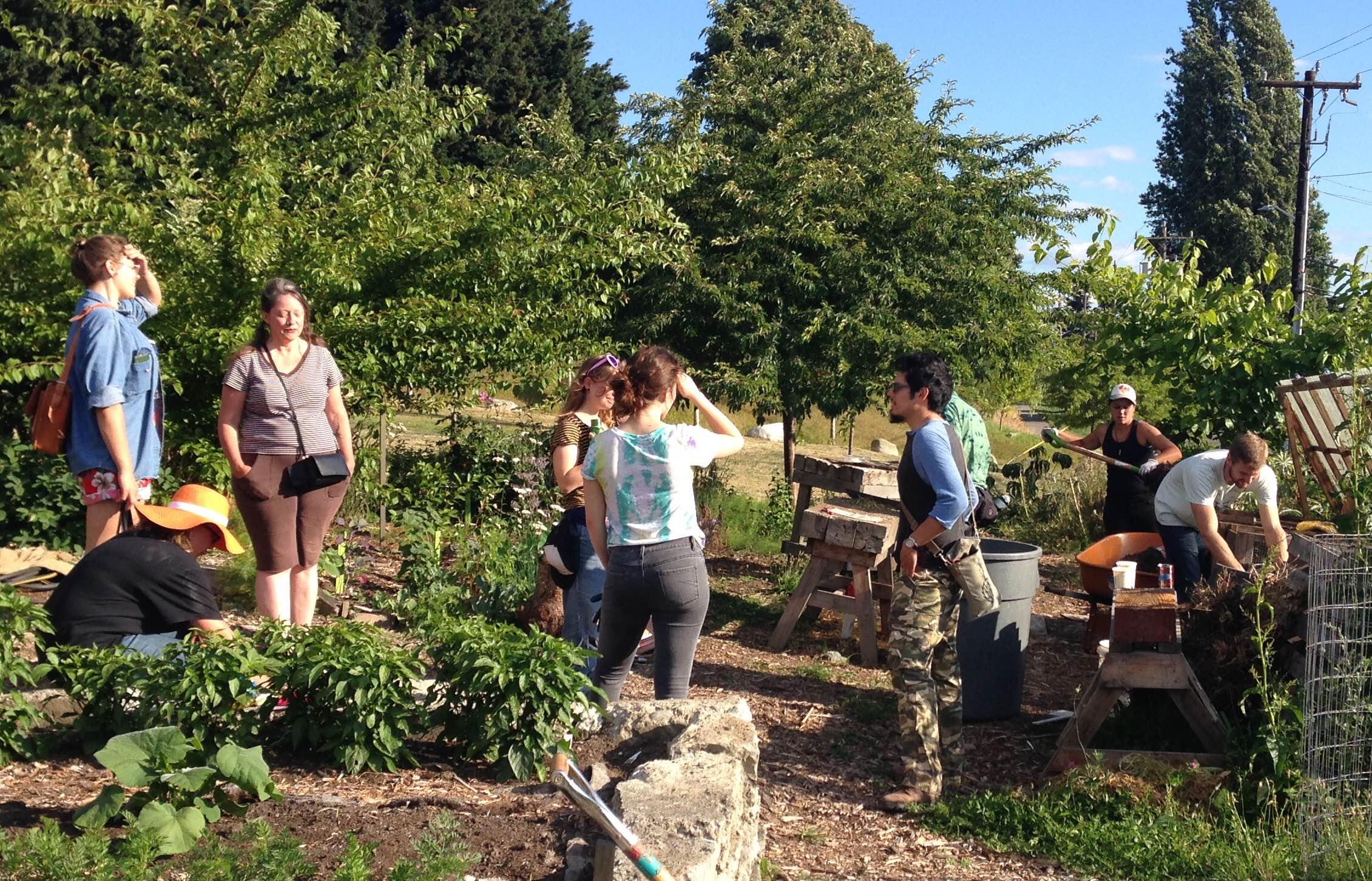 The Beacon Food Forest’s large network of volunteers is what helps make it such a successful sharing venture. Image source: American Planning Association

Couchsurfing not only connects travelers with a place to stay, but also with hosts who are excited to share conversation, food, culture, and more. Image source: Nomadasaurus

A lot of sharing organizations operate under the “teach a man to fish” mantra. Is it cool if volunteers come out and follow directions about how to water a certain plant? For sure! But it’s a lot cooler if, rather than just doing, community members are also learning gardening and horticulture skills. 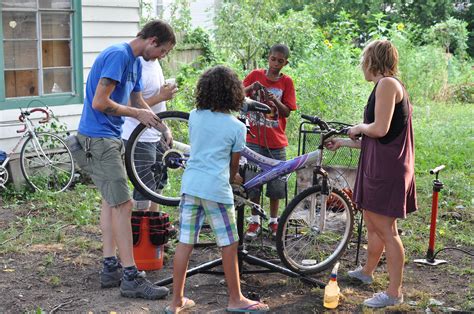 Sharing can be a spark for social change

The bureaucratic nature of policy change can definitely be a deterrent for successful sharing, but it can also spur sharers to take matters into their own hands.

According to the United Nations, 821 million people were undernourished in 2018. We have enough food to feed everyone, though. It is estimated that 30% of all food produced is wasted. If we can take control of the way we produce something like food and cooperatively share it, we might be able to start tackling these kinds of issues. In an article for Grist, Josh Farley, professor of ecological economics at the University of Vermont says, “if you take a look at any of the serious problems we face as a society, from global climate change to pandemics to developing new energy sources, I would argue that they have to be solved cooperatively.” Curbing consumerism definitely seems daunting, but exploring this idea of the “sharing economy” has made me excited. People are willing to share and I’m excited to try it more in my life. Maybe I’ll chat with that neighbor I only ever wave to. I’ll do my best to take the bus more. If you’re aware of any sharing organizations in Cincinnati, please share them with us, the more sharing resources we have the better!